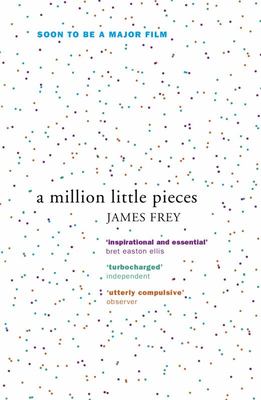 A story of drug and alcohol abuse and rehabilitation as it has never been told before. Recounted in visceral, kinetic prose, and crafted with a forthrightness that rejects piety, cynicism, and self-pity, it brings us face-to-face with a provocative new understanding of the nature of addiction and the meaning of recovery.


By the time he entered a drug and alcohol treatment facility, James Frey had taken his addictions to near-deadly extremes. He had so thoroughly ravaged his body that the facility s doctors were shocked he was still alive. The ensuing torments of detoxification and withdrawal, and the never-ending urge to use chemicals, are captured with a vitality and directness that recalls the seminal eye-opening power of William Burroughs s Junky.


But A Million Little Pieces refuses to fit any mold of drug literature. Inside the clinic, James is surrounded by patients as troubled as he is -- including a judge, a mobster, a one-time world-champion boxer, and a fragile former prostitute to whom he is not allowed to speak but their friendship and advice strikes James as stronger and truer than the clinic s droning dogma of How to Recover. James refuses to consider himself a victim of anything but his own bad decisions, and insists on accepting sole accountability for the person he has been and the person he may become--which runs directly counter to his counselors' recipes for recovery.


James has to fight to find his own way to confront the consequences of the life he has lived so far, and to determine what future, if any, he holds. It is this fight, told with the charismatic energy and power of One Flew over the Cuckoo's Nest, that is at the heart of A Million Little Pieces: the fight between one young man s will and the ever-tempting chemical trip to oblivion, the fight to survive on his own terms, for reasons close to his own heart.


A Million Little Pieces is an uncommonly genuine account of a life destroyed and a life reconstructed. It is also the introduction of a bold and talented literary voice.

An intense, instantly engaging, hard-hitting, yet beautifully written memoir of a life beyond the brink that touches every nerve.

'Excellent ! Frey's storytelling feels compulsive, involuntary ! poignant and tragic. The forthcoming film will almost certainly be a cult hit ! The good thing about Frey is that he writes as if he needs to; I hope his new compulsion thrives' -- William Leith, Spectator 'James Frey's utterly mesmerising account ! [is] easily the most remarkable non-fiction book about drugs and drug taking since Hunter S Thompson's Fear and Loathing in Las Vegas ! As a memoir, it is almost mythic. You can imagine it made epic by Martin Scorsese, the auteur of wayward American maleness in all its extremity ! Utterly compulsive' -- Observer 'Frey really can write. Brilliantly. And if you don't think so, f*** you' -- Evening Standard 'Clear sighted and intellectually honest' -- Literary Review 'A heartbreaking memoir ! inspirational and essential' -- Bret Easton Ellis 'This book is definitely going to be huge ! There is no question that he's a good writer. As soon as you start reading the book, Frey's voice rings out. It's clear and sharp and turbocharged ! We love rehab memoirs. This is a good one. It might even be a great one' -- Independent 'An extraordinary and deeply moving book that will make you think about family, friendship, love, religion, death and perhaps most of all, the human spirit' -- Irish Sunday Independent 'Startling and ultimately breath taking' -- Kirkus Reviews 'Horribly honest and funny ! Read this immediately' -- Gus Van Sant 'Harrowing, poetic and rather magnificent' -- FHM 'James Frey spent ten years addicted to alcohol and crack before going into rehab at the age of 23. This unrelenting memoir of his recovery spares no detail. Luckily, he is a good writer -- indulgent and uncompromising' -- Metro 'Frey is selfish, egocentric, violent and pompous ... What redeems this insufferably bad mannered book is that, at the end of the day, Frey can write. Brilliantly' -- Scotsman 'Frey's writing style vividly conveys the horrors of addiction ... dark humour and sharp observations are evidence of a keen intelligence and an unusual strength of character ... a totally absorbing book' -- The Magistrate 20040201 'Harrowing and unflinching ! This is not a book about drugs but about their aftermath ! Though definitely not for the faint hearted, Frey is often darkly and self deprecatingly funny. This is, in essence, a story of redemption and an incredibly moving one. This is a great book' -- Waterstone's Books Quarterly 20040201 'This book is a raging, brilliant debut.' -- Waterstone's Books Quarterly 20040322 'Crafted from genuine, raw emotion.' -- Irish Examiner 20040322 'Blisteringly written ! The prose is superb' -- Daily Express 20050826 'James Frey propelled the memoir of dysfunctional life to the top of the bestseller lists' -- Daily Telegraph 20060523 'Frey's book combined high quality drug porn with memorable characters and a strong narrative arc that describes a modern version of Rake's Progress.' -- Druglink Magazine 20060601 'The last remarkable book I read! I couldn't put it down.' -- Q Magazine, Dave Matthews 20060701

James Frey is originally from Cleveland, Ohio. He is married and lives in Los Angeles.