Xi Jinping has transformed China at home and abroad with a speed and aggression that few foresaw when he came to power in 2012. Finally, he is meeting resistance, both at home among disgruntled officials and disillusioned technocrats, and abroad from an emerging coalition of Western nations that seem de termined to resist China's geopolitical and high-tech expansion. With the United States and China at loggerheads, Richard McGregor outlines how the world came to be split in two. ...Show more A Higher Loyalty: Truth, Lies, and Leadership by James B. Comey

In his forthcoming book, former FBI director James Comey shares his never-before-told experiences from some of the highest-stakes situations of his career in the past two decades of American government, exploring what good, ethical leadership looks like, and how it drives sound decisions. His journey pr ovides an unprecedented entry into the corridors of power, and a remarkable lesson in what makes an effective leader.Mr Comey served as director of the FBI from 2013 to 2017, appointed to the post by President Barack Obama. He previously served as US attorney for the Southern District of New York, and the US deputy attorney general in the administration of President George W. Bush. From prosecuting the Mafia and Martha Stewart to helping change the Bush administration's policies on torture and electronic surveillance, overseeing the Hillary Clinton email investigation as well as ties between the Trump campaign and Russia, Comey has been involved in some of the most consequential cases and policies of recent history. ...Show more 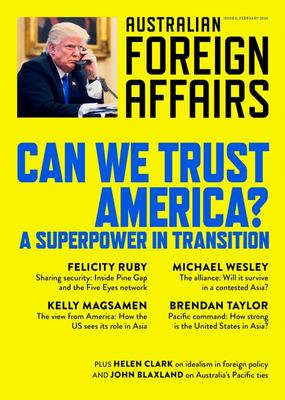 The eighth issue of Australian Foreign Affairs examines the changing status of the United States as its dominance in the Asia-Pacific faces challenge from China and its "America First" foreign policy marks a shift away from global engagement. Can We Trust America? looks at the uncertainties for Austral ia as questions arise about the commitment of its closest ally. ...Show more Our Sphere of Influence: Rivalry in the Pacific - Australian Foreign Affairs Issue 6 by Jonathan Pearlman

The latest issue of Australian Foreign Affairs examines Australia's struggle to retain influence among its Pacific island neighbours as foreign powers play a greater role and as small nations brace for the impacts of climate change. Australia's Sphere of Influence explores the security challenges facin g nations in the southern Pacific and whether Australia will need new approaches to secure its relations and interests. Hugh White- "In denial- Can Australia win the Pacific's great game?" "First victims- Climate change as an existential threat" Jenny Hayward-Jones- "Island diplomacy- How Canberra can secure its Pacific interests" "Papua New Guinea divides- Inside the forgotten colony" Plus x5 book reviews from leading experts, including award-winning journalist Elizabeth Becker. New feature The Fix, offering solutions to foreign policy problems. Richard Cooke's The Back Page, explaining and demystifying key foreign policy jargon. Correspondence on AFA5- Are We Asian Yet? ...Show more The latest issue of Australian Foreign Affairs explores Australia's status as the most China-dependent country in the developed world, and the potential risks this poses to its future prosperity and security. China Dependence examines how Australia should respond to the emerging economic and diplomatic challenges as its trade - for the first time - is heavily reliant on a country that is not a close ally or partner. ...Show more

When New Zealand Prime Minister Jacinda Ardern announced her pregnancy, the headlines raced around the world. But when Scott Morrison and Josh Frydenberg became the first Prime Minister and Treasurer duo since the 1970s to take on those roles while bringing up primary-school-aged children, this detail p assed largely without notice. Why do we accept that fathers will be absent? Why do so few men take parental leave in this country? In the last half-century, women have revolutionised the way we work and live. But men's lives have changed remarkably little in that time. Why is that? Is it because men don't want to change? Or is it because, every day in various ways, we tell them they shouldn't?" In this Quarterly Essay, Annabel Crabb deploys political observation, workplace research and her characteristic humour and intelligence to argue that gender equity cannot be achieved until men are as free to leave the workplace (when their lives demand it) as women are to enter it. ...Show more

Rucker and Leonnig have deep and unmatched sources throughout Washington DC, and for the past three years have chronicled in depth the ways President Donald Trump has reinvented the presidency in his own image, shaken foreign alliances and tested American institutions. It would be all too easy to mistak e Trump's first term for pure chaos. But Leonnig and Rucker show that in fact there is a pattern and meaning to the daily disorder. Relying on scores of exclusive new interviews with first-hand witnesses and rigorous original reporting, the authors reveal the 45th President up close as he stares down impeachment. They take readers inside Robert Mueller's Russia investigation and the Trump legal team's scramble for survival, behind the curtains as the West Wing scurries to clean up the President's mistakes and into the room to witness Trump's interactions with foreign leaders and members of his Cabinet, and assess the consequences.   ...Show more

Ray: "Traitor or Patriot? Now we have Edward Snowden’s own story — high-school dropout; hacker; joined the Army after 9/11; top secret security clearance at the age of 22.  Will make you wonder about the wisdom of Australia sharing its intelligence with the U.S. And make you worry abou t how much the government knows about you — which is everything."     Edward Snowden, the man who risked everything to expose the US government's system of mass surveillance, reveals for the first time the story of his life, including how he helped to build that system and what motivated him to try to bring it down. In 2013, twenty-nine-year-old Edward Snowden shocked the world when he broke with the American intelligence establishment and revealed that the United States government was secretly pursuing the means to collect every single phone call, text message, and email. The result would be an unprecedented system of mass surveillance with the ability to pry into the private lives of every person on earth. Six years later, Snowden reveals for the very first time how he helped to build this system and why he was moved to expose it. Spanning the bucolic Beltway suburbs of his childhood and the clandestine CIA and NSA postings of his adulthood, Permanent Record is the extraordinary account of a bright young man who grew up online - a man who became a spy, a whistleblower, and, in exile, the Internet's conscience. Written with wit, grace, passion, and an unflinching candor, Permanent Record is a crucial memoir of our digital age and destined to be a classic. ...Show more Lyndon Baines Johnson, Margaret Thatcher, Bill Clinton, Tony Blair, Barack Obama, Gordon Brown, Theresa May, and Donald Trump: each had different motivations, methods, and paths, but they all sought the highest office. And yet when they reached their goal, they often found that the power they had imagin ed was illusory. Their sweeping visions of reform faltered. They faced bureaucratic obstructions, but often the biggest obstruction was their own character. However, their personalities could help them as much as hurt them. Arguably the most successful of them, LBJ showed little indication that he supported what he is best known for - the Civil Rights Act - but his grit, resolve, and brute political skill saw him bend Congress to his will. David Runciman tackles the limitations of high office and how the personal histories of those who achieved the very pinnacles of power helped to define their successes and failures in office. These portraits show what characters are most effective in these offices. Could this be a blueprint for good and effective leadership in an age lacking good leaders? ...Show more

Islam and the Future of Tolerance - A Dialogue by Sam Harris; Maajid Nawaz

Is Islam a religion of peace or war? Is it amenable to reform? Why do so many Muslims seem to be drawn to extremism? And what do words like jihadism and fundamentalism really mean? In a world riven by misunderstanding and violence, Sam Harris--a famous atheist--and Majid Nawaz--a former radical--demonst rate how two people with very different religious views can find common ground and invite you to join in an urgently needed conversation. "How refreshing to read an honest yet affectionate exchange between the Islamist-turned-liberal-Muslim Maajid Nawaz and the neuroscientist who advocates mindful atheism, Sam Harris...Their back-and-forth clarifies multiple confusions that plague the public conversation about Islam."--Irshad Manji, New York Times Book Review "It is sadly uncommon, in any era, to find dialogue based on facts and reason--but even more rarely are Muslim and non-Muslim intellectuals able to maintain critical distance on broad questions about Islam. Which makes Islam and the Future of Tolerance something of a unicorn...Most conversations about religion are marked by the inability of either side to listen, but here, at last, is a proper debate.--New Statesman "A civil but honest dialogue...As illuminating as it is fascinating."--Ayaan Hirsi Ali ...Show more In Defence of Open Society by George Soros

George Soros - universally known for his philanthropy, progressive politics and investment success, and now under sustained attack from the far right, nationalists, and anti-Semites around the world - gives an impassioned defence of his core belief in open society. George Soros is among the world's mos t prominent public figures. He is one of the history's most successful investors and his philanthropy, led by the Open Society Foundations, has donated over $14 billion to promote democracy and human rights in more than 120 countries. But in recent years, Soros has become the focus of sustained right-wing attacks in the United States and around the world based on his commitment to open society, progressive politics and his Jewish background. In this brilliant and spirited book, Soros offers a compendium of his philosophy, a clarion call-to-arms for the ideals of an open society: freedom, democracy, rule of law, human rights, social justice, and social responsibility as a universal idea. In this age of nationalism, populism, anti-Semitism, and the spread of authoritarian governments, Soros's mission to support open societies is as urgent as it is important. ...Show more

Fascists Among Us by Jeff Sparrow

The first book since Christchurch to trace the massacre's fascist roots and what it represents. The massacre of more than fifty worshippers at mosques in Christchurch, New Zealand, shocked the world. The murders were not random. They expressed a particular ideology, one that the alleged perpetrator desc ribed as 'fascism'. But what does fascism mean today - and what kind of threat does it pose? Jeff Sparrow traces the history of the far right, showing how fascists have adapted to the new politics of the twenty-first century. He argues that the mosque killer represents a frightening new phenomenon - decentralised right-wing terrorism that recruits by committing atrocities, feeding on itself and spreading from country to country. Burgeoning in dark places online, contemporary fascism exults in violence and picks its targets strategically. Today, it is Muslims; tomorrow, it will be Jews or gays or Asians. Even the widespread despair generated by climate change is being harvested to weaponise young men with the politics of hate. With imitative massacres already occurring around the world, Christchurch must be a wake-up call. This book makes a compelling, urgent case for a new response to an old menace. ...Show more